OUR STORY — A LESSON IN HELPING ARTISANS THROUGH TRADE, NOT AID 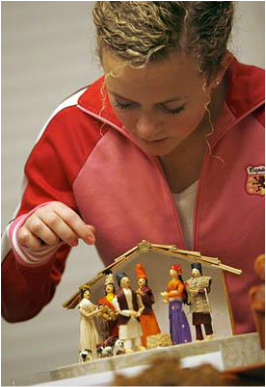 My family is having a wonderful experience with a humanitarian project of importing Nativity sets from 50 artisans in Asian and African countries. This is a service project for us where we buy the Nativities at whatever price the artisans desire and then sell the sets at a modest profit. All profits are returned to charity in Third World countries.

This project has been full of life-changing miracles that touch us deeply. There is one personal lesson from this project that is worth sharing here: Our life-changing experience of learning firsthand how artisans in Third World countries do not want a financial handout.

One of the Nativity items we import is a corn husk set from Nepal. In my communications with the group of women who make this set, I learned that the king of Nepal had recently thrown a military coup. He dismissed the democratically elected legislature and declared military control. He cut all the phone lines and Internet throughout the country for a period of time in order to thwart his opponents from organizing against him. These harsh events added to the dismal living situation in one of the world’s poorest nations. Nepal has only a 28 percent literacy rate—only four other countries in the world have a lower rate! So opportunities in Nepal to break out of the poverty cycle are rare.

The leader of this women’s group told me that the women who make the corn husk set are an “economically underprivileged group of women, some are illiterate and some are literate, but none of them has passed grade eight. They were trained in our center, free of charge in doll making, and when became skilled, they were employed.”

The leader further wrote, “The most important part is your ordering of the sets from your side, so that the women who collect, sort and dye the husk, make different sets and cottages, will get the job opportunities which is desperately needed by these women in the present difficult situation of our country. You will be helping the children of the mothers to feed and educate. The chain benefits to all the concerned people, especially women, matters the most.” (The “present difficult situation” she is referring to is the king’s military coup.)

I was very affected by this woman’s letter to me. I wanted to be of greater help to these women than just selling their Nativity sets. So when I sent payment for a shipment of sets, I included some extra money as a donation to their organization. Truth be told, I was inwardly proud of my generosity.

Then I learned a monumental lesson! The women’s group leader wrote to tell me she had received the payment with the added donation. Her reaction to the donation surprised me: “Thank you very much for your support, but we believe in support through trade, not aid.” Reading between the lines, I think she was even offended by the donation because it robbed her dignity.

I learned from her reaction that hardworking artisans everywhere need opportunities rather than handouts. They need distribution channels to get their goods to markets. I learned that—despite all the challenging things going on in their country—these artisans would rather endure big challenges and still maintain their dignity by working for a living than receive financial assistance. And although it would be far easier for me to simply write checks to worthwhile charities and be done with it, I learned that the gift of my family’s time spent importing and peddling Nativities benefits the artisans and their families in a much greater way.

From a lesson learned via a strong Nepali woman, I developed a more profound resolve to help Third World artisans by becoming a distribution channel for their goods and promoting their cause through public awareness. Suddenly, little corn husk figures are very important to me.
◄  back to Our Story﻿
© World Nativity 2005 - 2023