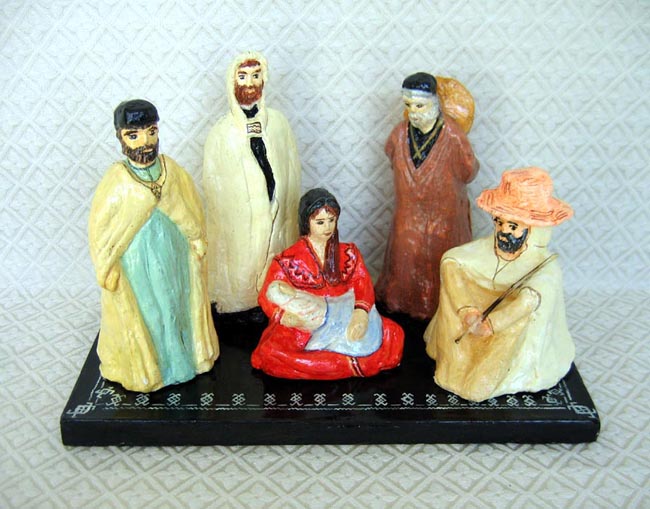 This plaster Nativity was made by a female artist in the mountain city of Tizi Ouzou, near Algiers, Algeria. The set is hand-designed, hand-molded and hand-painted. The set contains Joseph, Mary holding baby Jesus, and three shepherds. The figures are dressed in ancient Algerian Berber clothes. Mary’s dress is calledTakesiwt and she wears an Amendil on her head. The men’s capes are called Avernus and they wear Tacaciton their heads. The figures rest on a North African Berber rug. Joseph measures 7 inches tall.
​
The artist is from the Berber ethnic group, whose religion is 95% Muslim with a very small Christian population. She has devoted most of her life sculpting her Algerian Berber ancestors such as Mouloud Mammeri, Massinissa, Jugurtha, Mouloud Feraoun, Si moh u mhend, and Lala Fatma N Soumer using Algerian clay. She also works in plaster, concrete, stone, and resin.
﻿
◄  back to Africa Collection﻿
go to Nativities for Sale​  ►
© World Nativity 2005 - 2023