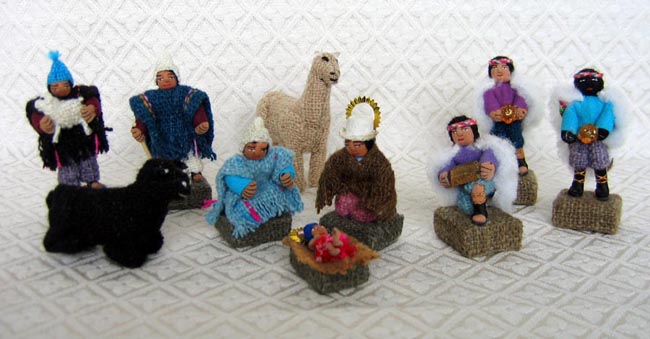 This Nativity from Bolivia is made from handspun, handwoven sheep’s wool that is dyed using natural pigments. The detailed figures are fashioned after the traditional dress of Andean Incas. The 10-piece set includes Mary, Joseph, baby Jesus, two shepherds, a llama, a cow, and three wise men with capes. The standing figures measure approximately 3.25 inches tall.
​
Hugo Escobar is the oldest son of Juana Escobar. Juana worked as an artisan for many years after being widowed, developing a style all her own and teaching artisan skills to her sons as she worked. Sadly, Juana passed away in 2007. However, she taught the skills that she had developed over the years to her sons; they now continue their mother’s work. The revenue earned from making Nativities and other intricate miniature dolls helps Hugo and his two brothers to continue their studies. Hugo is studying law in the state university in La Paz and his brother Jose, who also helped with the Nativity, is studying to be a news reporter. Younger brother Alfredo, who also helped with the Nativity, is finishing high school. Despite the hardship of losing their parents, the three brothers are continuing their studies thanks to the artisan skills they learned in family.
﻿
◄  back to Latin America Collection﻿
go to Nativities for Sale​  ►
© World Nativity 2005 - 2022