Christmas Gifts of Work: An ordinary family finds a creative way to help less-privileged artisans all over the world.
by Charlene Renberg Winters

​Little did Garrick Hyde and his wife, Ginger, realize how their family’s life would change as they watched a KBYU production nearly five years ago. The show, Small Fortunes, described how microcredit can transform lives by lending impoverished people small amounts of money to start businesses. The idea intrigued the Hydes.

“I got the idea that we could employ people to make Nativity sets,” Garrick explains. “Instead of giving a donation, we could hire artisans and preserve their dignity by providing them work.”

For the next year, the South Jordan, Utah, family commissioned Nativities from around the world, amassing a substantial collection. But that was just the beginning. The next step came to Garrick as he drove down the I-15 freeway one day. “God just spoke to me and said I could help artisans a lot more by selling Nativities for them, and while I didn’t know how to import or sell, I had to be willing to learn. Once we became willing to serve others in this way, God took over and put the details in place.” 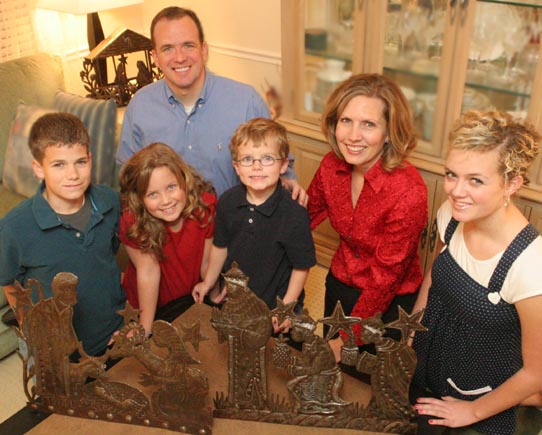 ​Instead of purchasing single Nativities, the family began buying them in bulk. The idea was to give the artisans more work and then sell the Nativities for a small profit so the family could assist even more impoverished people.

They have found 90 artists in Latin America, Asia and Africa through what Garrick considers miracles. “We have never traveled to the countries, so we have needed contacts. Often someone will have gone to a country and talked about it. Eventually the conversation chain comes to us, and we can make connections.”

At one point Garrick began dreaming about artisans in Mongolia. “I didn’t know anything about Mongolia, but the dreams became insistent.” He wrote a letter that began, “Dear Mission President and Wife of the Mongolian Mission” and mailed it to the LDS Church Office Building. “I had no idea if the letter would even get to Mongolia, but I asked these mission leaders if they knew any artists in Mongolia who needed help.” Not only did the letter arrive, but the Hydes learned the mission president’s wife collected Nativities and had spent two years seeking out Mongolian artisans who could create them. She e-mailed pictures of the Nativities to the Hydes, put them in touch with the artists, and connected them with a returned missionary who could help with communications.

“She set up the entire thing,” Garrick says. “It’s a good thing I mailed the letter when I did, because shortly after I reached them, they had to leave the mission because of poor health. If I had not followed the spiritual prompting when I received it, we would have missed the opportunity to help 12 artisans.”

Ginger explains, “Since beginning our project in 2005, we have sold 2,200 Nativities, raising more than $66,000 in profits. One hundred percent of proceeds are donated to humanitarian causes. Some has gone to the Church’s humanitarian efforts, but we have also donated to other charities. For example, we send a girl in Ethiopia to school and sponsor a boy in an orphanage in Nepal. We also are covering the food, housing, and education expenses for an orphanage of 45 Liberian refugee children who are living in a refugee camp in Ghana.”

The Hydes involve their children as much as possible. “We want our children to realize how blessed we are,” Ginger says.

“We all work on the project,” adds Garrick, “but the real hero is our 11-year-old Hannah. She writes a note and draws a picture that accompany every Nativity we sell.” Hannah has now written more than 900 letters, and Garrick notes that many of the recipients, “touched by her kindness,” write back. “We are training 6-year-old Everett, too.” The project is a 20-hour-a-week, year-round effort, which becomes a full-time job during the holiday season. During December they open their home the entire month for people to come and see their Nativities.

“Although this is a really big service project, our family has been the biggest recipient of blessings,” says Garrick. “We have beautiful contacts with these artists, and it is so clear they need an opportunity, not a handout. We simply do our part.”
​
© 2010 BYU Magazine
◄  back to Our Story﻿
© World Nativity 2005 - 2023