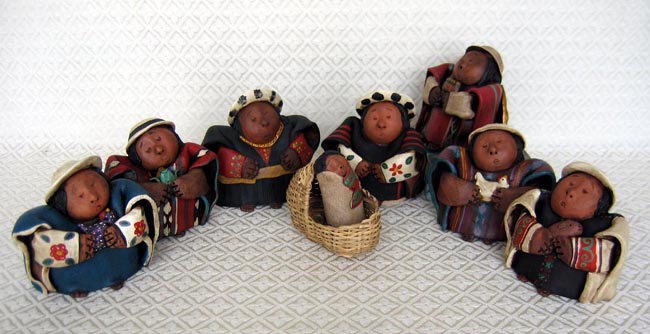 This 8-piece Nativity was made in Quito, Ecuador by artist Michael Ayala. The pieces are hand-formed in terracotta and hand-painted. The artist signed his initials in wet clay on the back. Joseph measures 4.5 inches tall and 5 inches wide.

The figures wear authentic dress from various communities in Ecuador. Mary (wearing a gold necklace) and Joseph represent Saraguro (Loja province). The angel has large gold wings on his back and plays a panpipe; his dress represents Ingapirca (Cañar province). Four shepherds each bring a unique gift (pictured from left): the shepherd from Otavalo (Imbabura province) brings a speckled purple hen, the shepherd from Cacha (Chimborazo province) brings an ear of corn, the shepherd from Ingapirca (Cañar province) brings a white chicken, and the shepherd from Salasaca (Tungurahua province) brings a guinea pig.
​
Michael Ayala was born in 1969 in Quito, Ecuador. A self-taught artist, he started very young with naturalist drawings and paintings, representing mainly nature. In 1987 he started painting in oils, inspired by Ecuadorian painters such as Tábara, Román, Villacís and Camilo Egas. In 1990 he made his first experiments with terracotta and ceramics, inspired by popular celebrations and Ecuadorian traditions. He continued to paint with oil and acrylics, sometimes including other materials like seeds, textiles and found objects. His work has been featured in several group and individual shows in museums and cultural centers in Ecuador, the United States of America, Canada, Mexico, Spain, Chile and Colombia. In 2002 he received a diploma of Master in Ceramics.
﻿
◄  back to Latin America Collection﻿
go to Nativities for Sale​  ►
© World Nativity 2005 - 2023