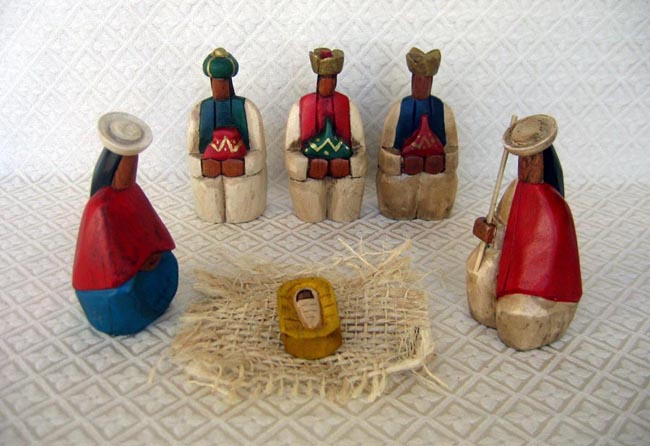 This is a 6-piece Nativity set hand-carved from cedar wood in an Indian style and then hand-painted. The set was made by Otavalo Indians in the Andes Mountains of Ecuador. The three wise men are represented in their three traditional colors of blue, green, and red. The figures are approximately 5 inches tall.
​
The set is marketed by MCCH in Quito.
MCCH (Maquita Cushunchic Comercializando Como Hermanos), which in Quechua and Spanish means “Let’s join hands and market as brothers,” is a cooperative marketing organization which was started in 1985 by Christian-based communities in Ecuador as a response to the rising costs of living. It represents 400 groups from all regions of the country which produce both handcrafts and agricultural products. The organization is divided into four sections: 1) Community Shops in the cities which sell handcrafts made by rural artisans, 2) An Agricultural sector made up of small farmers who collectively market their products- grains and cereals from the highlands and coffee and brown sugar from the rainforest and the Pacific coast, 3) Ecotourism lodges in the Andes, along the coast, and in the rainforest, which train peasants to work in the hospitality industry, and 4) Women’s groups which market their handcrafts collectively and fight against injustice.
﻿
◄  back to Latin America Collection﻿
go to Nativities for Sale​  ►
© World Nativity 2005 - 2022