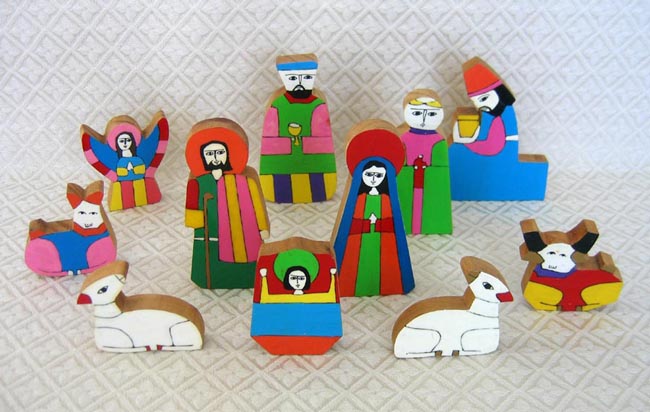 The set was handmade in the mountain village of La Palma, El Salvador, famously known as the “Artists’ Capital” for its multitude of artisans and distinctive, colorful painting style, and also as the “Cradle of Peace” for the city’s role in the peace talks that ended El Salvador’s long civil war.
​
New Awakenings Cooperative, San Salvador La Coordinacion de Talleres “Un Nuevo Despertar” is Spanish for “A New Awakening” and it represents a new beginning for refugees returning to El Salvador after years in exile during the 12-year Salvadoran civil war in the 1980s. The 20 artisan workshops represented by the Coordinacion Un Nuevo Despertar are located in the “repopulated” areas, rural areas formerly controlled by opposition forces which have been made available for resettlement by refugees returning from exile in Honduras, the mountains of El Salvador, or in barrios on the outskirts of San Salvador. Most of the 400 artisans are women, many of them widowed as a result of the war. New Awakenings produces wooden products painted with bright primary colors.
﻿
◄  back to Latin America Collection﻿
go to Nativities for Sale​  ►
© World Nativity 2005 - 2022