Family changing the world—one Nativity at a time
by Sharon Haddock
​
SOUTH JORDAN, Utah — Garrick Hyde remembers exactly where he was driving on the freeway the day God told him he needed to do more to help the world’s poverty-stricken artists. “I remember where I was. I remember what I was doing when God spoke to me and said, ‘You can do more,’” said the Mormon husband and father.

Hyde was already buying more handmade ethnic Nativities than he was admitting to his wife and hiding them in the trunk of his car. “I had watched a documentary on micro-credit, where small loans, as small as $20, $50 or $100, are made to someone to start a business. A villager might buy a cow and sell the cheese. Someone could buy a chicken and sell the eggs. The money could pay for their children to go to school. I was inspired by the creative ways people started businesses. At the end I thought, ‘I want to help people in a similarly creative way,’” Hyde told a group gathered for an after-dinner presentation. “I wanted to help people, but I also wanted to preserve their dignity.” 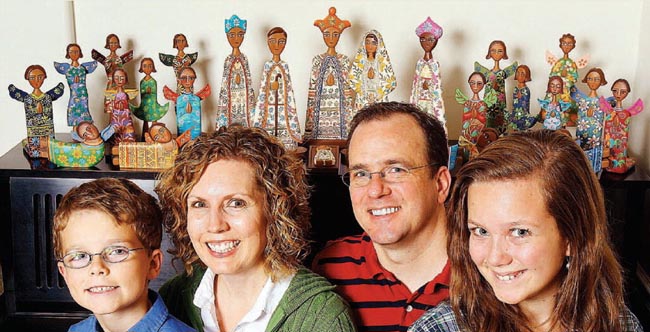 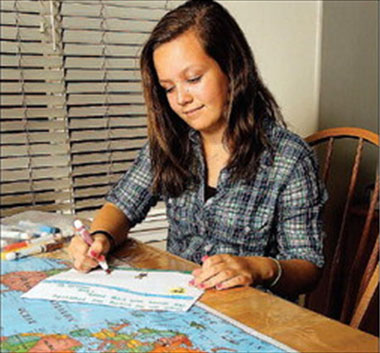 Hyde realized he could seek out and hire people in developing countries to make things that he would buy so that the people earned money for their work rather than receiving charity. “Christmas was coming so I thought, ‘Nativities?’” Hyde said.

He presented the idea to his wife and children, and a world-changing plan was born. They started commissioning Nativities and collecting a remarkable number of handmade prizes that include Nativities made of simple materials such as clay, corn husks, wire, beads and reclaimed metal. They found artists in Asia, Latin America, and Africa, men and women and teens who desperately needed income. Some are disabled. Some are diseased. Some of the connections were made through strangers who had been to the various countries and had come in contact with the Hydes.

Sometimes, Hyde believes, there was divine intervention. “I started having urgent dreams about Mongolia. I didn’t know anything about Mongolia, but the dreams were insistent that I needed to find artisans to hire there.” He ended up writing a letter to the current mission president and his wife. He sent it to the LDS Church Office Building hoping it might reach somebody who could help. The letter found its way to Mongolia and, turns out, the mission president’s wife collected Nativities and knew the few Mongolian artists who made them. (Because Mongolia had been under Communist rule, there were relatively few Christians in the country.) Soon after receiving Hyde’s letter, the mission president had health problems that required they leave their mission. If the Hydes had waited to contact them, the opportunity for Mongolian artists would have been lost.

That event was five years ago when Hyde was only buying one Nativity from each artisan for his own collection. Then God told him to help the artisans in a much bigger way by importing shipments of Nativities to resell. Hyde took the divine instruction seriously and made a full-scale business operation of his collecting, spending a good deal of his time trying to market the treasures coming in from all over the world. To date the Hydes have sold 2,570 Nativities. All profits from sales (currently $77,158) are donated to charities and humanitarian causes after the Hydes make sure their artists get a fair payment. The Hydes do not profit financially in any way from their humanitarian project.
​
“My goal is to skip all the middlemen (between the artist and the retail customer),” Hyde said. “So a humble artisan who would get $2.50 for a piece that sells in a retail store for $32 gets a much larger share of the price—80 percent rather than 8 percent. Lives change significantly with a 924% pay raise!” The Hydes are changing lives for the better.

Garrick is hoping his four children are watching the 20-hour-per-week effort and learning lessons about blessings and hard work. His younger children actively help with the project. Hannah, who is 12, writes a personal note and draws a picture to every Nativity customer. She has made more than 900 notes since the project began, so she is happy that 7-year-old Everett is learning to write notes too.
​
The project becomes a full-time job every holiday season with increased sales. To add to the fun, the Hydes open their home every day of December and put some of their Nativities on display for visitors to see during 30-minute guided tours.

Each of the Hydes’ Nativities is unique. One comes with 50 sheep. Another with 50 Wise Men. One—from Mongolia—has Joseph fashioned after Genghis Khan because the artist wanted to show great respect for Jesus’ earthly father. Another shows both a Heavenly Father and Joseph, the baby’s two fathers.

Some are garbed in traditional clothing of the country of origin: Guatemala, South Africa, Zimbabwe, etc. One has 93 pieces. One comes with a seven-piece band. Some are burned into tapestries. Some are large, like the one with 3-foot teakwood trees. Some are tiny, like the fully furnished yurt. Many are carved: of soapstone, teakwood, olive wood, gourds, coconuts. Some intricate versions have been pounded from steel oil drums left in the debris after the Haiti earthquake.

All kinds of unusual animals attend the Baby Jesus, including flamingoes, jaguars, porcupines, iguanas, giraffes and bears, even a dragon. One Brazilian Nativity has a rooster that crows at midnight to announce the Holy Birth. “In Brazil, they believe there was a miracle because the rooster crowed at midnight rather than at dawn,” Hyde said.

In a Nativity created from spare car parts, the Baby Jesus is made from the spark plug. “Of course He would be the spark plug,” Hyde said. “The spark plug gives the car life.”