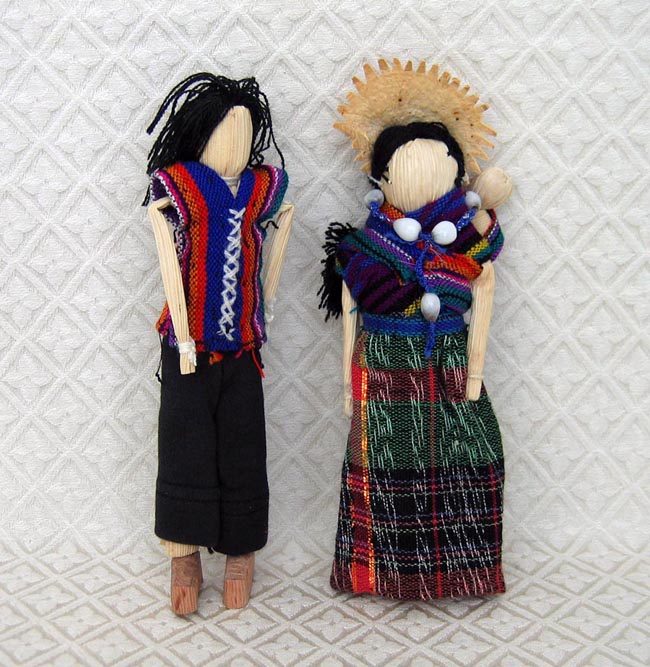 This Nativity was made by a group of women in an isolated mountain village called Alta Vera Paz in Guatemala. The village is an 8-hour trip from Guatemala City, with 4 hours of the trip spent on a one-and- a-half lane winding dirt road that goes up the mountains. The figures are made from dried corn husks (corn is the mainstay of their diet) and dressed with colorful hand-woven Guatemalan cloth (the same material the women use in making their own skirts). Joseph stands approximately 7 inches tall.

Each figure made by the women is unique. In some sets Mary holds baby Jesus in front of her, while in other sets Jesus is carried on Mary’s back (pictured in our set), which is a common practice in this Guatemalan village. In our set, Mary wears a necklace made from a grain called Job’s Tears.

Mary wears a hat made from a dried mushroom. The villagers find these mushrooms growing on trees when they walk long distances to gather firewood in the mountains. The slow-growing mushrooms grow for about 50 years and get as big as 8 inches in width; the ones used for the hats are probably between five and ten years old. Two of the angels have mushroom wings.

In total, this set includes 25 figures: Joseph, Mary carrying baby Jesus on her back, four angels (three with mushroom wings and one with cornhusk wings), two shepherds with staffs, a village woman, three pigs, a red cloth rooster, a cornhusk chicken, two sitting sheep, a small red dog, two fuchsia burros, a mystery animal that looks like a triceratops dinosaur, a red llama, a blue donkey, and three wise men. One wise man wears an amazing vest of aluminum pull tabs (from soda cans) that have been crocheted together.

The women who made the dolls are participants in a humanitarian literacy program. None of them had the opportunity to go to school as children but they go to school now three days per week. They take their babies and preschoolers with them when they go to class. Some of them have to walk long distances to be able to attend school. In this program the women attend school for three years to gain the equivalent of six years of traditional education. When the women finish their schooling they are then given vocational training and an opportunity to receive a small micro-credit loan. The first loans were given in September 2011; after only one month some of the women have already earned enough to pay off the loan because of the businesses they chose to pursue with their money. Many of the women used their loan to buy the material to make these cornhusk Holy Families.

The villagers of Alta Vera Paz live in small homes with dirt floors. Usually the whole family sleeps in the one room, which is a kitchen as well as a bedroom. The village has no electricity and the villagers often have to walk long distances to get water. Many of the families eat only one meal a day.
﻿
◄  back to Latin America Collection﻿
go to Nativities for Sale​  ►
© World Nativity 2005 - 2022