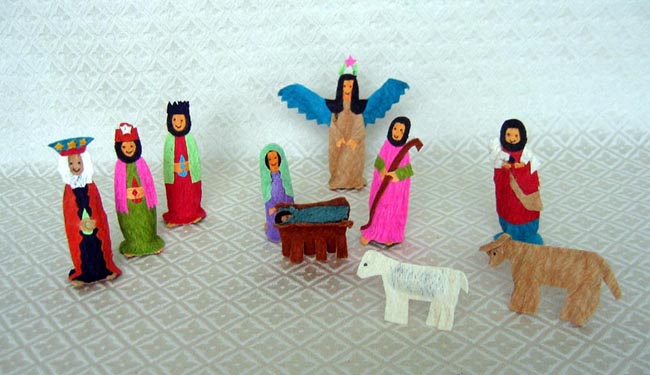 This Nativity set contains ten pieces created from tree bark. This type of craft is called Tuno (the tree bark is not called Tuno, just the craft). The craft is indigenous to the Miskito Indians, who soak the bark, pound it thin, then dry each piece in the sun before shaping it into artwork. Tuno was once used by the Miskito for making their clothing; now it is a source of income to many families in isolated villages in eastern Honduras. The tallest piece in this set measures 4.5 inches tall.

Both natural and bought dyes are used to dye the bark. The dark brown is boiled mahogany bark; the bright blue is a group of seeds that form in a bright red flower that looks like kissing lips; the yellow is from achiote, a saffron-like herb that grows on a bush and colors the villagers’ rice yellow. Dull reds are from flowers called jamaica, which they use to make tea. Some greens are from grasses and leaves. But most of the other bright colors are commercial dyes bought from the river traders who peddle their wares up and down the Rio Patuca. The Miskitos who make Tuno all seem to live around the Patuca River in the center of La Mosquitia (the largest rainforest in this part of the northern hemisphere at 40,000 acres), where they can get the bark that they use for the Tuno craft. Two types of trees are used for the craft, both of which regenerate their bark like a banana tree does. The Indians are very secretive and protective about these trees.
​
The Miskito Indians are hunter gatherers with no particular vocational tradition. They just hunt and gather what they can find in the forest. This Mosquitia rainforest keeps the Miskito people separated from the rest of the world. There are no roads, electricity, or sewage management. Water comes from the river. But the secluded Indians were touched by Americans during the Contra–Sandinista conflict (the Miskito were the Contras) so they now wear Americanized T-shirts and jeans instead of their traditional clothes made of Tuno cloth.
﻿
◄  back to Latin America Collection﻿
go to Nativities for Sale​  ►
© World Nativity 2005 - 2023