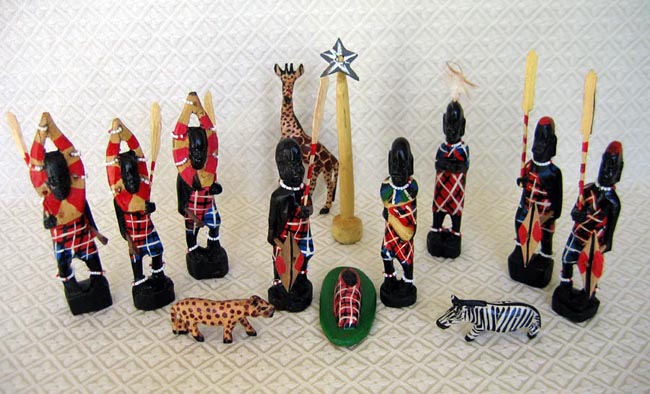 This Nativity set is carved from ebony by Joseph Kisilu. The set is painted by Steven Kyalo. Both Joseph and Mary are bald because, according to the Maasai culture, when a baby is born the father and the mother shave off all their hair as a symbol that they have conquered or have been relieved of a heavy burden. Mary wears a beautiful necklace and carries a gourd filled with milk to feed the baby Jesus. Joseph carries a spear and shield as a symbol of his duty to protect his sacred family. The angel is represented by a Maasai messenger who wears a feather on his head. The two shepherds with red hair, each carrying a spear and shield, are Maasai warriors who protect the village and herds from predators. The three wise men are Maasai seers; they wear headdresses and carry a club and spear. The three wild animals signify that the Maasai live in the African wild with these animals. A star and pedestal complete the set. The Joseph figure measures 5.5 inches tall (excluding his spear).
​
The set was sent to us from our friend Steven Kyalo, who runs an artisan workshop in a slum called Gikomba near the city center of Nairobi, Kenya. Steven also runs an orphanage and school to help 89 orphans in Nairobi; he works very hard to help others. To learn more about Steven’s wonderful service, view the Helping in Kenya photo album on our Facebook page.
﻿
◄  back to Africa Collection
go to Nativities for Sale​  ►
© World Nativity 2005 - 2023