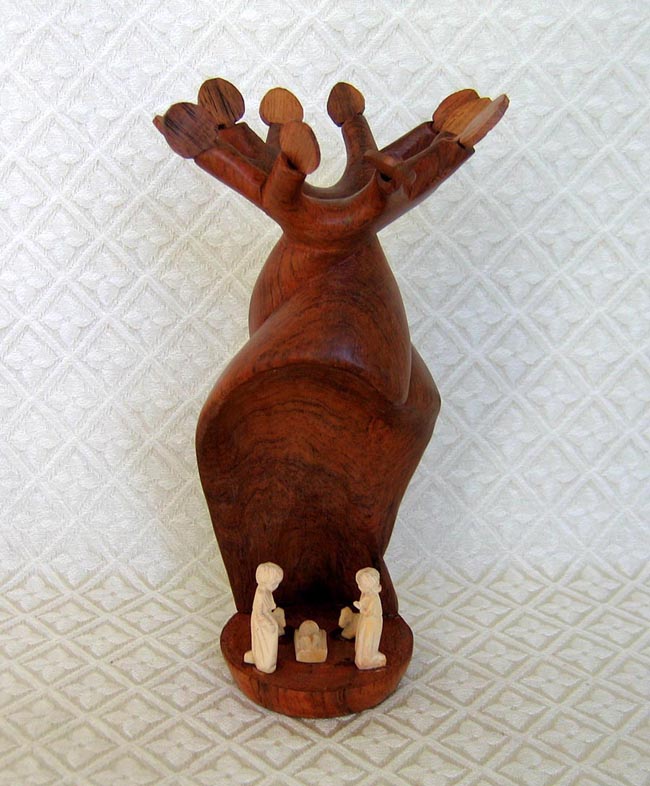 This Nativity scene from the island of Madagascar contains the Holy Family placed in the twisted trunk of a baobab tree. The Holy Family pieces are carved from a precious white wood called Fanazava. The baobab tree is carved from palisander wood, which is from the rosewood family. Palisander is very hard and contains a natural oil as found in rosewood. The piece measures 7.5 inches high.

The Malagasy people generally carve in a detailed European style (rather than traditional African styles) because these wood carvers learned their carving style from French Jesuit priests. A baobab is a great tree to include with a Nativity scene because this tree has been known to live up to 3000 years (so there are Baobab trees alive today that were alive when Jesus lived). The Baobab tree is also known as the Spirit of Life Tree in Africa.
​
This sculpture was purchased from a carver named Dada Be (“Grandfather”) in Ambositra, a town in the region of the Betsileo tribe. This town is reputed as the artisan capital of the country, regarded as home of the best Malagasy wood carvings. Several people in the same family will work on each carving. Each person has a specific job: one does a rough outline of the figure; the second person (the best woodworker) does the detailed carving; and then others (often women) will sand, stain, and polish the sculpture.
﻿
◄  back to Africa Collection﻿
go to Nativities for Sale​  ►
© World Nativity 2005 - 2020