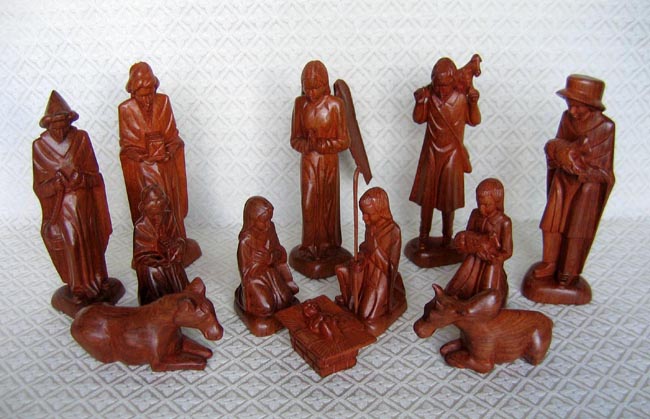 This Nativity set from the island of Madagascar contains twelve pieces: the Holy Family, an angel, three shepherds holding sheep, a zebu cattle with hump on its back, a donkey, and three wise men. All pieces are carved from palisander wood, which is from the rosewood family. Palisander is very hard and contains a natural oil as found in rosewood. The standing figures are approximately 8 inches tall.
​
The Malagasy people carve in a detailed European style (rather than traditional African styles) because these wood carvers learned their carving style from French Jesuit priests. This set was purchased from a native carver selling in an open market in Antananarivo, the capital of Madagascar.
﻿
◄  back to Africa Collection﻿
go to Nativities for Sale​  ►
© World Nativity 2005 - 2022