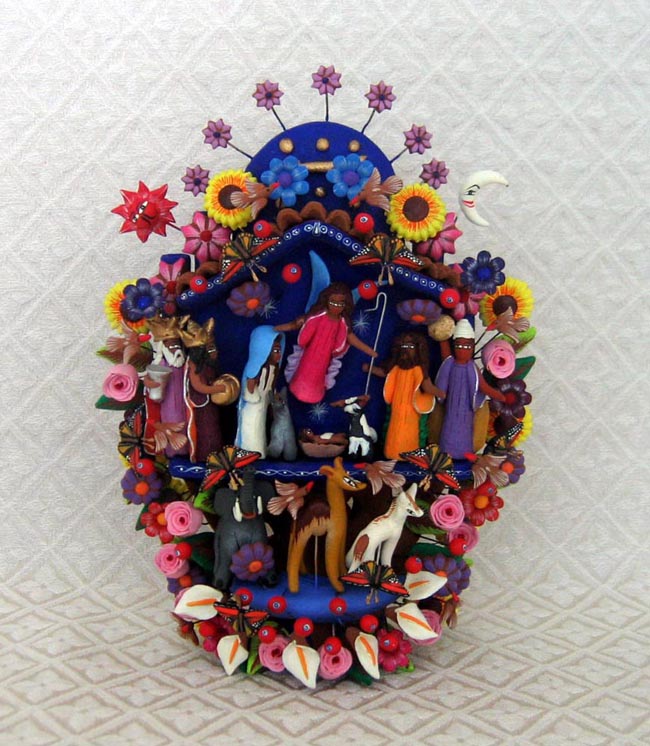 This intricate miniature tree of life (Arbol de la Vida) is made by Juan Hernández Arzaluz in Metepec, Mexico. He signed his name in the wet clay on the back. The pieces are very small, so the work is done carefully and slowly. Many of Juan’s trees take 20 days to make. The item measures 7.5 inches tall by 5.5 inches wide.

The Arbol de la Vida (tree of life) is a distinctive art form from the state of Metepec. They get their name from the original versions of the trees, which explained the origins of life. The trees are made of clay with a flat base. The leaves, fruit, figures and/or animals are all attached by wire to the tree. They are painted with aniline or acrylic paints; however, many trees are now left unpainted, often made with red terracotta, for a more distinctive look. The Arboles have crossed over into other aspects of Mexican culture: trees depicting the Day of the Dead and the Nativity have recently become popular.

Juan was 33 years old in 2006. He is assisted by his wife, Maribel Vasquez Gomez, in making the miniature trees. Out of the ten children in the Hernández family, only two have dedicated their talents to making Arboles de la Vida. Juan began working with clay by his father’s side at 7 years old. He entered his first concurso (juried show) in 1985 at the age of 12 and won first place (in the juvenile division).

First Juan forms the intricate clay pieces, then Maribel painstakingly paints each piece without aid of eyeglasses or magnifying lens. Maribel’s brother Saed also helps with the molding of some of the decorative small suns and flowers. Once the clay piece has been crafted, it is baked for 2 hours at 400 degrees centigrade. The smaller the piece, the more expensive its price.
​
More examples of Juan Hernández Arzaluz’s trees are found in the book “Ceramica: Mexican Pottery of the 20th Century,” page 141.
﻿
◄  back to Latin America Collection﻿
go to Nativities for Sale​  ►
© World Nativity 2005 - 2022