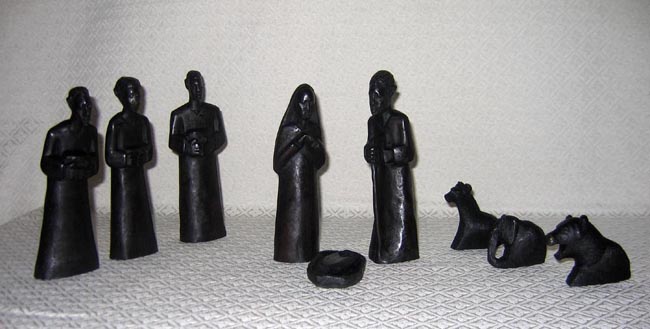 This Nativity set was hand-carved from ironwood by Abel Juma in Beira, Mozambique. The set includes a lioness with her mouth open (run Baby Jesus, run!). The standing figures are approximately 8.5 inches tall.

Abel learned to sculpt wood from his father while they were living in Malawi as refugees during the Mozambican civil war. His father always sculpted as a hobby. Abel is the oldest of 6 children; they are orphans. Their parents were killed in a car accident in South Africa several years ago and he has been the breadwinner for the family since that time. He was 27 years old in 2006 when we purchased the set.

In 2004, Abel bought a bicycle so he could take his carvings to several locations in the city. His sister died in 2005 and he had to pay for the funeral, so he sold the bicycle to cover the costs. He rented a small mud home for his siblings that has no electricity or running water. Education is a priority for him so he has tried to keep his younger siblings in school. Abel speaks English and 10 other languages (mostly native dialects).

Abel mostly uses ironwood for his work. He buys his wood in Nhamatanda, a district some miles away. He also occasionally buys his wood from farmers. He used to go into the bush to find wood for his work. When he went to the bush or jungle, it took three days: one full day to walk to the bush, one day to gather the wood, then another full day to walk home.
﻿
◄  back to Africa Collection
go to Nativities for Sale​  ►
© World Nativity 2005 - 2022