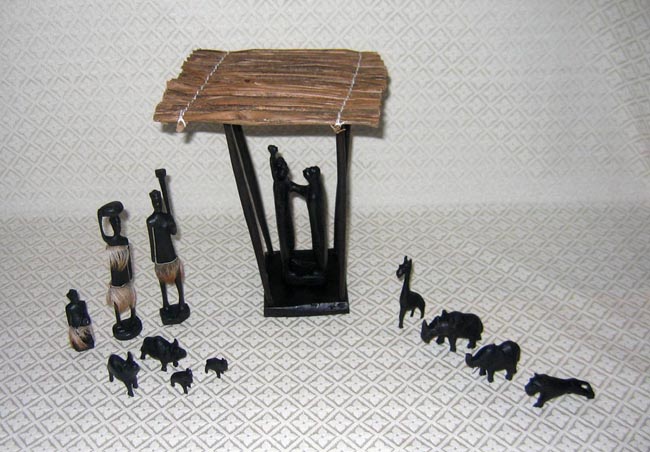 This Nativity village was hand-carved from ironwood by Vasco Andrade near Beira, Mozambique. His father taught him to sculpt as a means to help support their family. One unique feature of this set is that Jesus is presented as a small boy on top of Joseph’s shoulders with both parents looking up at him. The Joseph / Jesus figure is 6.5 inches tall.

The set also contains a unique stable covered in fiber from banana trees. The stable is 9.5 inches tall and the roof measures 7 by 6 inches. Three villagers have come to pay their respects to Jesus: a man holding a plow, a woman with a bowl on her head, and a boy carrying a stick. The villagers’ clothing is real animal fur. The eight animals in the set are a giraffe, a rhino, an elephant, and a lion (on the right), with a water buffalo and gazelle with two baby gazelles on the left.

Vasco finished third grade under the colonial educational system (the equivalent of a sixth-grade education under the current Mozambican system). He wasn’t able to study further because he was recruited as a soldier by rebel forces during the Mozambican civil war. He was only 11 years old.

Vasco now lives with his wife and three children. He says he is very happy, because with the money he earns from his work he is able to support his family. He says his work requires a lot of patience and a lot of imagination. He sculpts with the help of several friends. They buy their wood in Nhamatanda, a district some miles away.
﻿
◄  back to Africa Collection
go to Nativities for Sale​  ►
© World Nativity 2005 - 2023