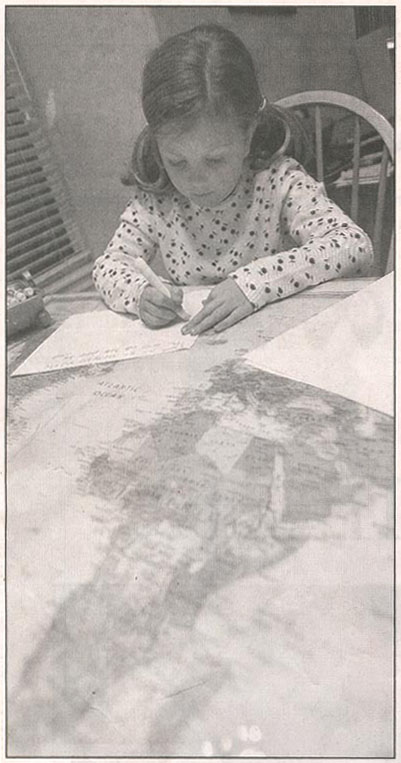 SOUTH JORDAN — It all started two years ago when Garrick Hyde’s family bought a new Nativity set for Christmas, handmade by an artist from a poor village in the Czech Republic.

When Garrick learned that many of the world’s Nativity carvers live in countries where families get by on $500 a year, he bought another set, then another. Soon word got out that he had a collection of more than 100. Friends started asking him to order them Nativities from Third World countries, and before the Hydes knew it, they were running a charity to help the poorest of the poor from Nigeria to Nepal.

Aside from postage, every penny of profit from the Hyde Family Nativity Project is given directly to charities in poor villages, so children can learn to read and women can take out “micro” loans of a few dollars to buy chickens or fruit trees and start a small business.

Garrick, his wife, Ginger, and their four children never dreamed that all of those Mary and Joseph figurines would help put food on the plates of hundreds of families they’ve never met. Dinner conversations around a table covered with a world map suddenly took on new meaning.

“We’d talk about Nativities we were ordering from Africa or Latin America, and the kids would point to the countries while we ate,” says Garrick, 38, who works in the software industry. “I’d always wanted them to have a global view of things — to understand that we’re all connected. This is the best way I can think of for them to learn that lesson.”

Eager to share the story behind their family project, the Hydes recently invited me to bring along Indian takeout and join them for a Free Lunch around their world map. Chloe, 13, Alec, 11, Hannah, 7, and Everett, 2, are all growing up knowing the true value of a dollar in places like China and Cameroon.

Alec’s weekly $3 allowance “would feed a whole village,” he says. “They’re all so poor — it feels good to do something to help them.”

Chloe’s job is to track orders on the computer, while Hannah writes thank-you notes to everyone who buys a Nativity and helps unpack wise men and shepherds from boxes that arrive from overseas every month.

“When you hear what a huge difference a few dollars can make — that a woman will be able to feed her children and send them to school — how can we not help?” says Ginger, a 39-year-old homemaker.

So far this year, the Hydes have imported about 250 Nativity sets and given $8,100 to Third World charities. They pay fair prices for the collections, allowing artists to upgrade their living conditions and buy materials to keep working. In Mongolia, a carver was able to triple his family’s annual income after the Hydes gave him their first order for several sets.

Each Nativity requires hours of work and intricate detail: Miniature collections from Nepal are made with colorful, tightly woven corn husks, while Nativities from China and Africa are patiently carved out of camphor wood or sculpted in clay.

“I love the symbolism behind each set,” says Garrick. “They’re all so different — it’s fascinating to see how each culture represents the Nativity.”

When his first order from Nepal arrived without any Joseph pieces, Garrick wondered if there was a hidden meaning behind the omission. It turned out that the artist didn’t have 50 cents for materials to add Joseph to the sets.

“That’s why we’re doing this — to give people a hand up,” he says. “Fifty cents might not sound like a lot to us. But on the other side of the world, it can change lives.”