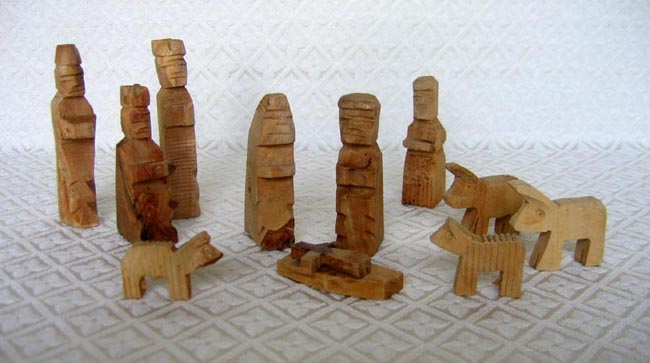 This simple Nativity set was carved from olive wood by Christian boys ages 8–17 in Bethlehem. The father of this Christian family is a skilled carver and his children are learning the trade. The olive wood used in this set is taken from branches pruned from olive trees around Bethlehem (the trees are not harmed by the annual pruning). The sets have 11 pieces: Joseph, Mary, Jesus, shepherd, two sheep, two cattle, and three wise men. To distinguish the Joseph figure from the shepherd, the boys carved long stripes in the shepherd's clothing to match his sheep. The tallest figures are 3.75 inches.
​
Life for residents of Bethlehem has become very difficult in recent years due to isolation caused by roadblocks, checkpoints, and stretches of concrete blocks put in place by Israeli occupation forces. Tourism has declined 90% in Bethlehem, causing serious economic losses. With a majority of businesses having had to relocate or close, most residents can barely make a living.
﻿
◄  back to Asia Collection
go to Nativities for Sale​  ►
© World Nativity 2005 - 2023