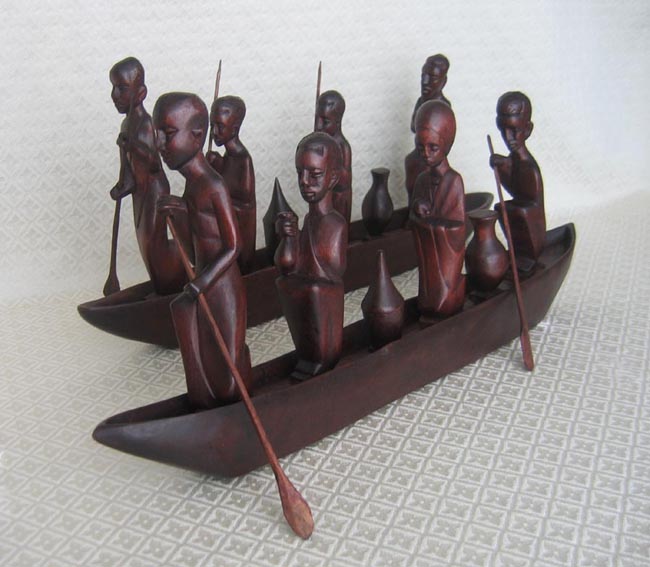 This unique Nativity from Rwanda features the Holy Family being escorted by two boatmen across Lake Kivu. This vast, deep lake forms part of the border between Rwanda and DR Congo. A serene Mary cradles baby Jesus while Joseph sits near them. The second boat contains three wise men, also escorted by a boatman.

Each piece is crafted from light-colored wood and then stained a deep brown. The wood is probably jacaranda. The boats with removable figurines measure approximately 22 inches long by 10 inches tall.
​
Rwanda's developing economy suffered heavily in the wake of the 1994 genocide, but has since strengthened. In the immediate aftermath of the genocide, females represented 70% of Rwanda’s population since so many men had been killed. Women must play a significant role in Rwanda’s rebuilding and democratic transition. Previously excluded from positions of influence, women now participate as elected officials, community leaders, and entrepreneurs. Most importantly, women provide the sole source of income in many families due to the loss of so many men. ​Women now lead the production of traditional arts and crafts throughout the country.
﻿
◄  back to Africa Collection﻿
go to Nativities for Sale​  ►
© World Nativity 2005 - 2022