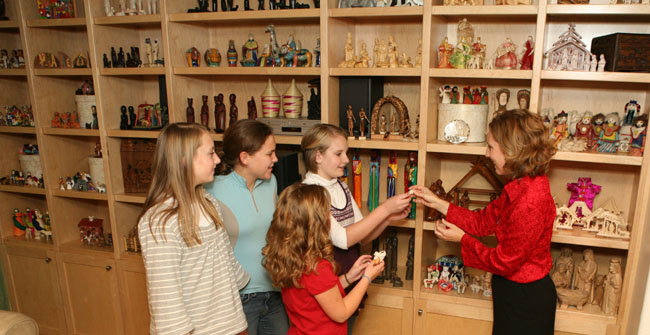 Each set is steeped with culture, from the deep black ebony Nativity from the Congo, to the vivid blue, green, and pink tin Nativity from Oaxaca, Mexico. These Nativity sets are more than just cultural artwork for the artisans who create them, however. The sets represent the creators’ livelihood, and if they don’t sell their work, their families don’t eat. The Hyde family from South Jordan, Utah, is working to help artisans like these “through trade, not aid.”

The family first got interested in helping increase self-reliance throughout the world when they watched Small Fortunes, a documentary about the microcredit movement. “We were deeply affected by the stories in this documentary detailing how creatively people around the world used their loans to earn income,” Garrick Hyde says. “We admired their ingenuity. We were also impressed by the efforts of good, everyday people in the United States who pooled money to fund loans in far-off places around the globe.”

The family wanted to help fund some microcredit projects, but they also wanted to do it in the same creative spirit with which the credit recipients earned their incomes. The Hydes were interested in how different cultures portray the Christmas Nativity story, so they decided to purchase Nativity scenes made by humble artisans in poor countries.

“I loved how I felt knowing that with each purchase we were making a difference to an artisan,” Hyde says.

The Hyde family began buying sets for their collection. “We thought we might buy a few, but we felt compelled to keep collecting more,” Hyde says.

Then God took the opportunity to inspire Hyde that he could do a lot more to help artisans than to purchase only one Nativity for the family’s collection. The idea came to import shipments of Nativity scenes and sell them for the artisans as a service project.

“I admired God’s idea but politely declined—I was far too busy to venture into an unfamiliar world of import and sales,” says Hyde. “Ultimately God helped me overcome my fear of this endeavor by instructing me that we didn’t have to know how to do the project, we just had to be willing. Once we were willing, God took over and made all the details fall into place with amazing precision.”

The Hydes have managed to keep their expenses low, and none of the proceeds from purchases of Nativity sets go toward any overhead for their nonprofit organization, World Nativity. The Hydes donate their time as well as all packaging and administrative expenses. This enables them to direct their modest profit directly to seeding new projects.

“You probably don’t hear many nonprofits say they don’t need any fundraising, but that’s our reality,” Hyde says. “Many people want to give us a donation, but my answer is always, ‘You are welcome to purchase a Nativity to help the artisans, but we don’t accept donations.’ ”

Since 2005, World Nativity has sold more than 1,700 Nativities for poor, struggling artisans, and has given $50,000 to charitable causes, including microfinance organizations. They originally started selling their Nativities on eBay to reach a broad base of customers. Then in late 2007, they created the web site www.worldnativity.com, where they showcase the Nativities they sell, as well as their own collection.
​
Hyde feels that the greatest blessing from this project is seeing firsthand how much God loves all of His children. “We see the immensely intricate chain of events that God will orchestrate to put us in contact with an artisan in a distant country who needs the opportunity to sell his or her items,” he says. “When it comes to helping others in need, there are no coincidences.”
​
© 2009 BYU Marriott School of Management Center for Economic Self-Reliance
◄  back to Our Story﻿
© World Nativity 2005 - 2023