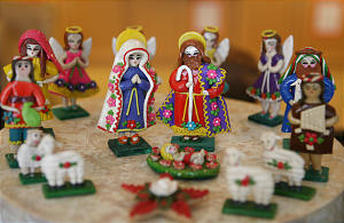 SOUTH JORDAN, Utah — Wander through Garrick and Ginger Hyde’s home during the Christmas holiday. You may have to fight the urge to hum Disney’s “It’s a Small World.”

All the earth’s colors and cultures seem to be on display in scores of Nativity scenes positioned throughout the Hydes’ South Jordan residence. Each festive creche — be it from Puerto Rico, Sri Lanka, Mozambique or some land in between — captures the reverence of the first Christmas while celebrating the unique aspects of its maker’s homeland. A yuletide geography lesson.

By itself, the Hydes’ international Nativity collection (which includes sets from 51 countries, and counting) could pass for a first-rate museum exhibit. But the creches are more than educational, holiday ornaments. For the Hydes, almost all of the pieces in their collection represent an opportunity. A chance to help an artisan in, say, Mongolia or Uganda to enjoy the gift of self-reliance and dignity.

A couple of years ago the Hydes were themselves looking for an opportunity. The family — which belongs to the Highland 5th Ward, South Jordan Utah Highland Stake — hoped to be able to help hard-working folks in developing countries support themselves via their artistic talents. They had enjoyed collecting creches from different lands and realized their holiday hobby could be a means of helping others. They began placing Nativity set orders with artisan groups and workshops in poor countries — then sold the sets to folks who shared their love for well-crafted creches.

He said small but seemingly miraculous events and encounters placed them in contact with artisans from various parts of the world. In one instance, a relative working with a Brigham Young University program in China developed a relationship with a workshop and an association developed. On another occasion, the Hydes contacted missionaries in Mongolia in search of local artisans they might be able to help. Again, an association between the Hydes and local artisans soon developed.

And just last summer, the Hydes attended BYU Education Week and, by chance, met a man who had recently returned from a humanitarian mission in Mozambique. The returned missionary helped the family establish artisan contacts in that African nation. Again, an ongoing association was set in motion.

The Hydes’ humanitarian import practice is simple. The family commissions and purchases the Nativity sets from artists in various nations, then sells them to friends, neighbors and collectors. One hundred percent of any profits the family realizes are given to the LDS Foundation or other charities benefiting developing countries, Brother Hyde said.

Family members say they have been blessed for their efforts. Once the Hydes ordered a shipment of sets from a women’s artisan group in Nepal. They included extra money in their order as a charitable donation. Then the Hydes learned a valued lesson in self-reliance.

“The women’s group leader wrote to tell me she had received the payment with the added donation,” wrote Brother Hyde in a recent essay about the Nativity project. “Her reaction to the donation surprised me: ‘Thank you very much for your support, but we believe in support through trade, not aid.”‘

During the Christmas season, Brother Hyde takes dozens of families on creche tours through his home. Visitors are fascinated by the cultural diversity on display in each set. Many artisans featured in the Hyde collection come from lands where such tableaus are uncommon. Unfamiliar with traditional creches, they simply divine their own definition of the sacred Nativity.

The result? An eclectic demonstration of imaginative interpretation. The artisans typically enlist their own culture’s definition of love, family, reverence and worship when they craft a Nativity set. For example, the Joseph figure from one Mongolian carver carries an uncanny resemblance to Genghis Khan, the Mongol conqueror and national hero. Meanwhile, the Joseph figure in an African creche affectionately carries the toddler-aged Christ child on his shoulder.

Many of the sets reveal the resourcefulness of their respective creators. One simple Colombian creche was made from discarded orange peels. Another was crafted by Filipino artisans who incorporated wood carvings and tightly-rolled strips of newspapers to design the Holy Family.

Visitors often ask to buy a set or two. The Hydes gladly facilitate the orders — and the opportunities for impoverished artisans continue.