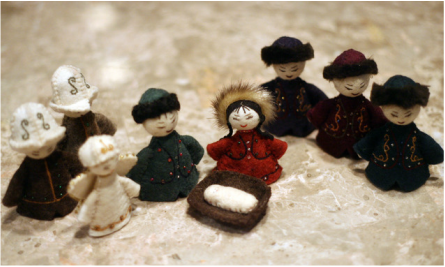 Utah family helps the world, one Nativity at a time: South Jordan residents sell artisans’ works, use profit to pay it forward
by Katie Drake

It looks like the cast of “The Lion King,” created in glass beads and wire from Zimbabwe. While the Disney flick may not come to mind when most people think of a Nativity, in Garrick Hyde’s collection of 472 Nativities, rare animals are practically pedestrian.

In Hyde’s Nativities, the Holy Family flies on an airplane, is serenaded by a mariachi band and is represented in almost every material imaginable, from felted wool made in Kyrgyzstan to pottery from Peru and bronze from Burkina Faso.

But the Nativities are more than a unique holiday display for Hyde. He has raised more than $122,000 since purchasing his first Nativity in 2004, and donated all the profits to projects that help people around the globe.

Hyde and his family were inspired by a documentary on microfinance and decided to buy a few Nativities from artisans in struggling countries. Paying a fair price for their work helps the artists provide for their families, Hyde said, and even $50 can help them set up a business.

He continued purchasing Nativities, eventually buying so many he had to hide them from his wife, Ginger, in the trunk of the car. But driving down I-15 one day, Hyde realized he needed to do more.

“I heard God’s voice in my head saying ‘You can do more to help these people. You don’t have to know how to do this, you just have to be willing to serve,’ ” Hyde said.

And so the World Nativity Project was born. Since that day, Hyde has awakened each morning with a divinely-inspired “to-do” list in his head, slowly making contacts with artists around the world, often through acquaintances who had chance encounters with artisans while traveling.

Recently, a Nativity customer of Hyde’s from Michigan contacted a humanitarian organization in Ireland that was doing work in Lesotho. The Irish were helping the grandmothers in a Lesotho village market dolls made from wool felt. Hyde was able to contact the women and commission many Nativities to sell. The export order—a first for the village—prompted a visit to the women from the country’s minister of culture and the U.S. ambassador to Lesotho, Hyde said, beaming as he showed photos of the visit that had been emailed to him.

The Hydes purchase the Nativities and pay for shipping to their South Jordan home from more than 100 artists around the world—no middle men—and sell them online. The selling prices, while reasonable for a handmade work of art, are marked up slightly. Those profits are donated to non-profit and non-government organizations that specialize in humanitarian work. Hyde even refuses to take credit cards because of the associated fees, relying solely on checks and cash because “that 3 percent could go to help someone.”

“Every purchase helps twice,” is Hyde’s motto, referring to the purchase helping the artisan and the profits helping women and children around the world.

The family focuses its charity on women, making small loans that allow them to open a business, and on education programs for children. For Hyde, who works as a cost-reduction consultant for hospitals, the project is a way to live Christ’s edict to serve others, which is emphasized in his LDS faith.

“It is just a really beautiful experience to teach our four children,” Ginger Hyde said. “Other people in the world will do anything they can to feed and educate their families.”

The family fridge features charts and graphs tracking the growth of the project, alongside letters and photos of children the family is sponsoring: Nabin, a Nepalese orphan, and Ganet, an Ethiopian girl whose family cannot afford school.

Liberian refugee orphans have also benefited from the Hydes’ generosity, said Andy Jones, founder of the Africa Heartwood Project, a registered nonprofit based in Salt Lake City. The organization runs an orphanage, builds infrastructure to bring clean water to African villages and sponsors vocational programs for orphans and the deaf. Jones estimates the Hyde family has paid for 100,000 meals and 16,000 days of school for the 30 orphaned refugees his charity supports in Buduburam, Ghana. Now that the civil war in Liberia has ended, the family is helping the orphans move back to their homeland, Jones said.

“He is an extremely generous person,” Jones said of Hyde. “He sees all of this money going in and out, and he doesn’t hang on to any of it. It’s a labor of love for him.”

That love and care comes with each Nativity, which Hyde carefully packs up—complete with a hand-drawn thank-you note from one of his children—and ships to collectors around the country and increasingly around the world. The project now generates year-round business and sells about 100 Nativities each month.

Utahns will have a chance to see some of Hyde’s collection in December, when the family is hosting Nativity tours in their home. This year’s tour—themed “Peace”—will run three times a night through Dec. 23. Last year, the family welcomed more than 1,300 visitors.

Jamie Lloyd goes on the tour at least twice each year, once with her family and again with the young women from her LDS ward. She says seeing a Nativity made of soda cans or chip bags gives the youngsters a new appreciation for the things they have, while inspiring their creativity and helping them learn about other cultures.

“It’s just really interesting to see how the different cultures bring their stories to life through a piece of art,” said Lloyd.
​
Hyde has always been fascinated by other cultures, but has yet to visit any of the countries where the Nativities are made. With four children, he doesn’t have extra money to travel but hopes eventually to meet some of the artists and do humanitarian work in those countries once his children are grown.

“This is what we can do for now,” Hyde said. “Someday I hope to visit them. I’ve got friends all over the world.”

At a Glance:
2011 Hyde Family Nativity Tours
The Hyde family of South Jordan is hosting Nativity tours three times per night through Dec. 23. Tours feature 100 of the family’s Nativities, last 30 minutes and can accommodate 25 people. Tours are free, but due to high demand reservations are required. Nativities are not available for purchase at the event, but pre-orders are allowed. To schedule a tour, or to purchase a Nativity, visit www.worldnativity.com.

To learn more about the Africa Heartwood Project, visit www.africaheartwoodproject.org.