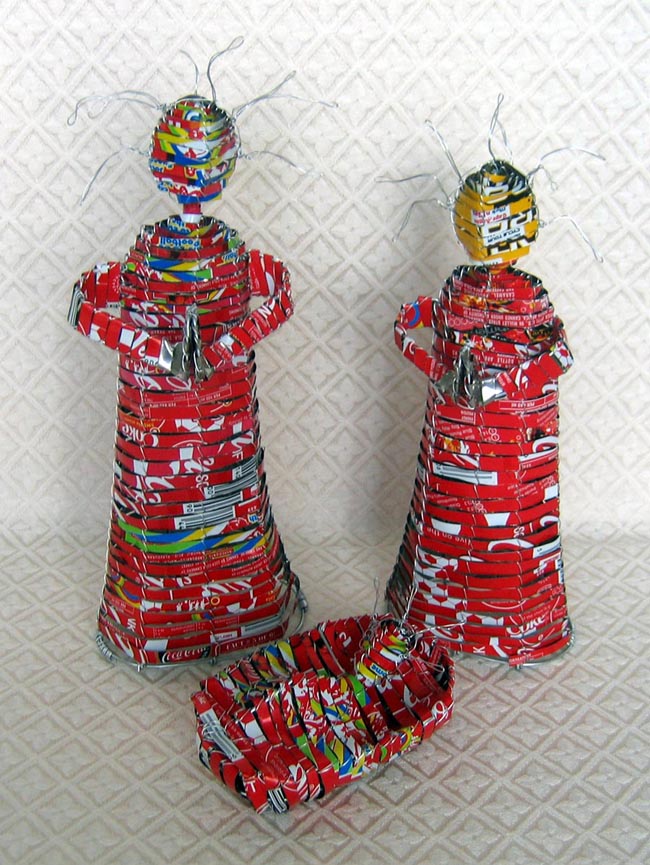 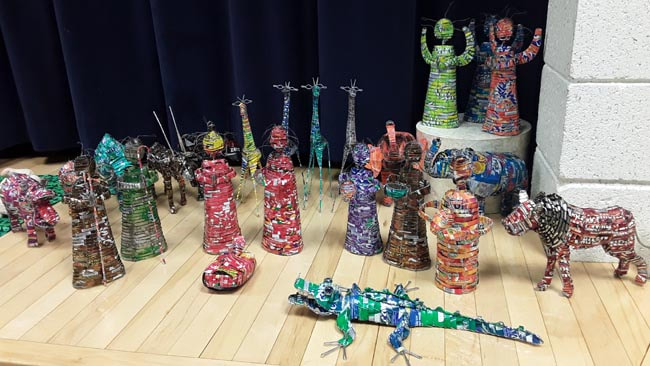 This Nativity scene is made from strips of recycled soda cans woven into a wire frame. In Africa, soda cans are made from tin-coated steel with aluminum tops, so only the tops are desirable for traditional recycling. Since the rest of the can is unusable, a whole crafts industry has sprung up to profit from this metal.

The scene was created by an organization called GuguCrafters, comprised of four Zimbabwean refugees living in Cape Town, South Africa. They left Zimbabwe because of the political turmoil, hyperinflation, extreme shortages of basic foods and service, and very high unemployment. Like so many Zimbabweans who have flooded into South Africa, they only desire to earn a basic living to support their families located either with them in South Africa or back home in Zimbabwe.

The large influx of refugees into South Africa has caused an ugly backlash of horrific xenophobia—and even murders—by gangs of locals in South Africa. The excuse of these locals is that the foreigners somehow take their jobs, homes, and state benefits. The four members of GuguCrafters were surprised to become victims of this xenophobia in May 2008 when most of their tools and materials were stolen. It took two months for the group to get back on their feet again in their craft production. The group now works from home because they fear that attacks may repeat again.
​
This wire art form originated in Chitungwiza, Zimbabwe in the early 1990s. The artisans of GuguCrafters are native Zimbabweans who learned this craft in their home country and they would ideally be making the crafts in Zimbabwe today if their homeland was not currently besieged by economic and political catastrophes.
﻿
◄  back to Africa Collection﻿
go to Nativities for Sale​  ►
© World Nativity 2005 - 2023