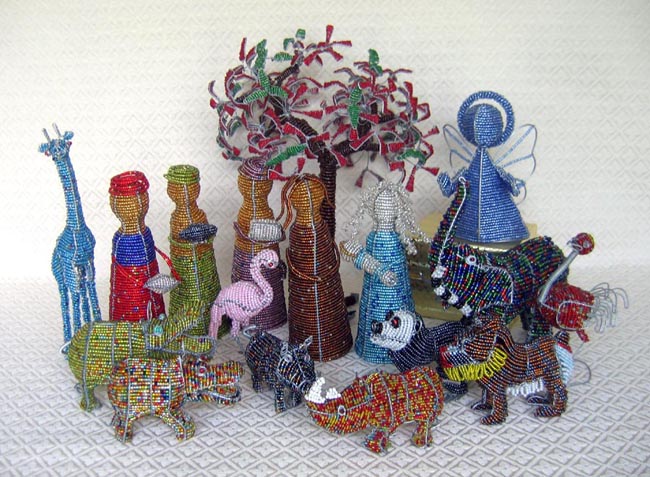 This Nativity set of wire and beads is made by Patmore. The beads used in these figures are high-quality glass beads rather than plastic beads. The set includes Joseph with dreadlock hair, Mary holding baby Jesus, three wise men with gifts, an angel, a mopane tree, and ten African animals (pictured from left): a giraffe, a mamma and baby hippo, a flamingo, a warthog, a baby rhino, a lemur, a mandrill baboon, an elephant, and an ostrich. The wise men figures measure 7.5 inches tall.

Patmore is one of the finest bead-and-wire artisans in Africa. He was born in Chitungwiza, the very city in Zimbabwe where this type of wire and bead art originated in the early 1990s. He has been a refugee in South Africa since 2005, due to the terrible economic and political crisis in his homeland. His father passed away in 2002, which means that Patmore now is financially responsible for his entire immediate family—his mother, his aunt, his sister and her young child, and his youngest brother—all of whom live back in Zimbabwe. He aspires to one day return to Zimbabwe so that he may continue his studies and have a better life for himself and his family.
​
Patmore specializes particularly in wire and bead Bentleys and other vintage cars, as well as detailed Harley-type motorcycles and animals like elephants, cattle, and birds (especially the toucan and the macaw). He began making Nativity sets only after we saw his intricate animals and asked if he would try Nativities.
﻿
◄  back to Africa Collection﻿
go to Nativities for Sale​  ►
© World Nativity 2005 - 2023