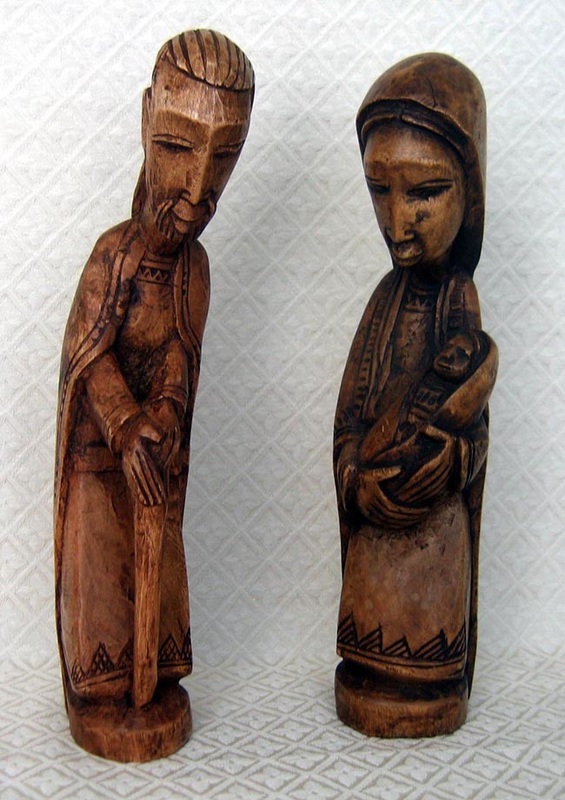 This wood carving portrays Joseph standing beside Mary, who holds baby Jesus. The scene was carved by Mirirai Chengerai, a legally blind 42-year-old Shona sculptor from Harare, Zimbabwe. The Shona tribe of Zimbabwe is famous for their stone sculptures, but they also have a rich artistic heritage in woodcarvings. Despite his impaired vision, Mirirai produced a detailed Africanized version of the Christian icon. The wood is light jacaranda wood that has been stained dark brown. The figures measure 12 inches tall.
​
Getting this Nativity to the United States was an unbelievable, tragic saga. We placed our order for many sets in February 2008, expecting the shipment to be finished in summer 2008. A man named Kunaka was hired to pay the artisans each month, collect their pieces, and mail the entire order to us when ready. Kunaka happened to support President Mugabe’s political opponent in the June 2008 presidential election; when Mugabe refused to cede power after he lost the election, his political supporters began torturing, raping, and murdering the supporters of the political opponent who won the election. Very sadly, Kunaka’s assistant named Peter was murdered by Mugabe’s supporters. Then they demolished Kunaka’s cement home while he fled the country. Our completed Nativities were in the home when it was demolished, so we concluded that they were all destroyed. Miraculously, Kunaka’s relatives were able to retrieve many pieces from the wreckage (when they weren’t being watched by Mugabe’s supporters), then take them to South Africa and mail them to us. We received the salvaged pieces of the February order in October 2008. What a sad saga, which has not ended due to continued political and economic turmoil in Zimbabwe.
﻿
◄  back to Africa Collection
go to Nativities for Sale​  ►
© World Nativity 2005 - 2021