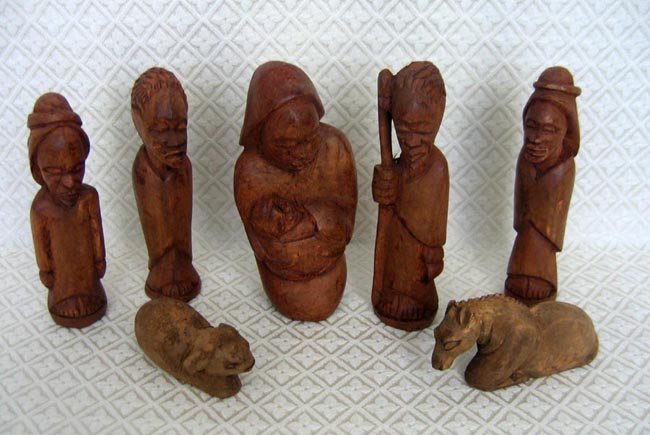 The set is made by Joseph Marufu, a Shona sculptor. He was born in Beatrice, Zimbabwe in 1974 and started carving in 1997. Joseph works in stone and wood, producing animals, Nativities, family circles, and abstracts. Joseph was born with a genetic disorder so his skin produces little melanin pigment; thus, he is referred to as an albino in Zimbabwe. The disorder means that he works indoors in poorly lit conditions and must avoid the sun, whereas most Shona sculptors carve in natural daylight and have a tremendous advantage from the natural light when working with wood and stone shading and texture. In spite of his disability, Joseph produces quality Africanized versions of the birth of Christ.
​
Getting this Nativity to the United States was an unbelievable, tragic saga. We placed our order for many sets in February 2008, expecting the shipment to be finished in summer 2008. A man named Kunaka was hired to pay the artisans each month, collect their pieces, and mail the entire order to us when ready. Kunaka happened to support President Mugabe’s political opponent in the June 2008 presidential election; when Mugabe refused to cede power after he lost the election, his political supporters began torturing, raping, and murdering the supporters of the political opponent who won the election. Very sadly, Kunaka’s assistant named Peter was murdered by Mugabe’s supporters. Then they demolished Kunaka’s cement home while he fled the country. Our completed Nativities were in the home when it was demolished, so we concluded that they were all destroyed. Miraculously, Kunaka’s relatives were able to retrieve many pieces from the wreckage (when they weren’t being watched by Mugabe’s supporters), then take them to South Africa and mail them to us. We received the salvaged pieces of the February order in October 2008. What a sad saga, which has not ended due to continued political and economic turmoil in Zimbabwe.
﻿
◄  back to Africa Collection
go to Nativities for Sale​  ►
© World Nativity 2005 - 2022