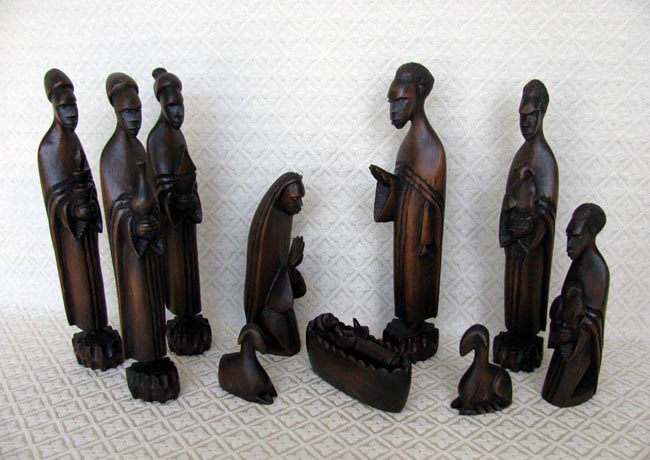 This Nativity was purchased in approximately 2002 in a market in Luanda, Angola. The buyer is a Texan woman who worked for a company that had an office in Luanda. She had the opportunity to travel there and work with local people several times. She wrote of her travels to Angola:

“It was such an experience! I recall once I was there at Easter … I was in a church full of people who were so thankful for the little they had. It was a moving experience. I went to the market and bought a few things for myself and others. One item I have cherished to date is this Nativity. I have stored my Nativity for probably fourteen years.”

We had the fortune to purchase the set in 2016 from the original owner. The set is carved from rosewood. The set includes 11 pieces: Joseph, Mary, baby Jesus, manger bed, two shepherds, two lambs, and three wise men. All of the men in the set are barefoot. The Joseph figure measures 9.75 inches tall.
﻿
◄  back to Africa Collection﻿
go to Nativities for Sale​  ►
© World Nativity 2005 - 2022